About the Kelvin Zone 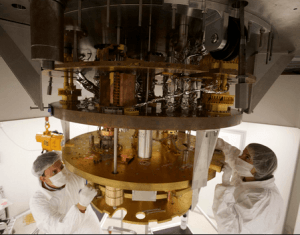 Engineers put together ‘the coldest cubic metre in the universe’. | Image from INFN Press Office

The kelvin (K) is the International Standard unit used to measure temperature. Named after the famous physicist, Lord Kelvin, it’s one of the seven standard units of measurement.

The kelvin temperature scale starts from 0 K, which is a point where there is no heat energy at all. This point is also known as ‘absolute zero’, because it is impossible for anything to have a lower temperature. In the more familiar Celsius scale this point is -273.15 °C, making the freezing point of water 273.15 K. Simple! Italian researchers have actually managed to cool a copper container to 0.0006 kelvin, making it the coldest thing in the whole universe.

Engineers use the kelvin scale instead of Celsius in their work as it allows for calculations without negative numbers. This is useful for engineers working with very cold systems and it also helps avoid confusion between engineers from different nationalities, who could be more used to Celsius or Fahrenheit.

This is a general engineering zone, where we will meet five engineers from different areas of engineering.

In this zone there is an engineer who works for the government to protect homes and other buildings from the effects of the changing climate, another who designs cooling systems to keep parts of car engines from catching on fire, and another who analyses how well the structures of spacecraft perform. There is also an engineer who works on RAF helicopters and jets, and another who designs protection systems for scientific equipment.

ASK the engineers any questions you have about engineering.

CHAT with the engineers in a 30 minute long text chat booked by your teacher.

VOTE for your favourite engineer to win a £500 prize to spend on communicating more engineering.